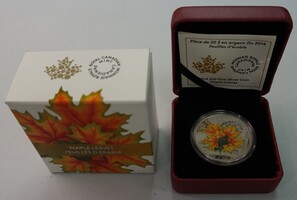 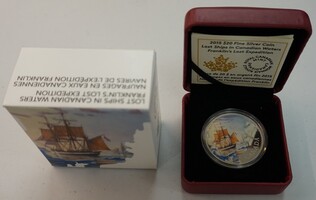 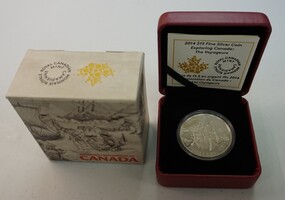 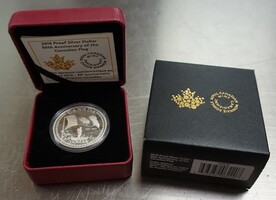 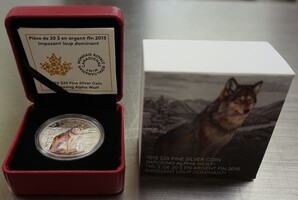 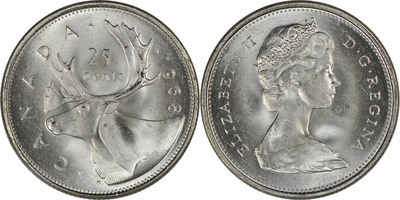 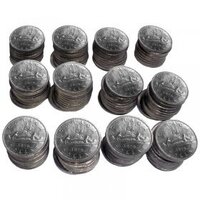 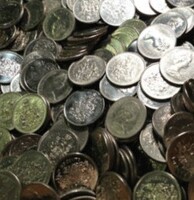 An extremely cute design, sure to be popular with your family! Order yours today!

The maple leaf has long been an internationally recognized emblem of Canada, its people and the land itself. But there are multiple species of maples, making it as diverse as the population it is often used to represent. This striking silver coin pays tribute to one of several maple species that are native to Canada: the sugar maple ( Acer saccharum ). The sugar maple’s colourful transformation in autumn is artistically depicted in the coin’s image. From their green summer hues (as seen in the background leaves), the maple leaves in the foreground are transitioning to the brilliant red, orange and yellow tints that dominate Canada’s breathtaking fall landscape. Glow-in-the-dark technology allows for the sudden appearance of a maple leaf in the centre of the image; the transformation now complete, this uniformly orange leaf glows radiantly.

A beautiful gift for someone who enjoys the colours of autumn mixed with a fun glow-in-the-dark maple leave. Low mintage, hurry and order yours today!

•  Beautiful maple leaves design on your coin has been meticulously rendered in full colour.
•   SURPRISE!  Your coin uses glow-in-the-dark technology so that you can see the sudden appearance of a single,maple leaf hidden amongst the design when viewing the coin in the dark.
•  Will not wear out! Innovative glow-in-the-dark technology will not wear out—ever! For best effect, simply recharge the coin under a light.
•  Your coin is GST/HST exempt with a low worldwide mintage of only 7,500.

In the background, numerous sugar maple leaves are layered one on top of another, still resplendent in summer’s green hues. In the foreground, a branch is dotted with leaves that have begun their transition to the brilliant fall tints of red, orange and yellow when the coin is removed from natural light, a maple leaf appears in the centre of the image.

Packaging:
Your coin is encapsulated and presented in a Royal Canadian Mint-branded maroon clamshell with custom beauty box.

Not here! the white North has thy bones; and thou
Heroic sailor-soul,
Art passing on thine happier voyage now
Toward no earthly pole.
Alfred, Lord Tennyson (1809-1892), as engraved on a monument to Sir John Franklin in Westminster Abbey

It was the sensational story of its time, one that still captivates the imagination 170 years later. Under Sir John Franklin's command, two Royal Navy ships set sail with every expectation of success in
May of 1845 to chart the last unknown part of the Northwest Passage—yet they never returned. Subsequent expeditions who searched for the missing ships uncovered stories and relics; then, in September 2014 came news that stunned the world: Canada's Victoria Strait Expedition had discovered the wreck of H.M.S.  Erebus , Franklin's flagship, lying on the Arctic seabed. This scientific breakthrough raises the possibility that new evidence could help solve some of the lingering mysteries surrounding the lost expedition and its final days, for  what really happened to the Franklin expedition ? In its Lost Ships in Canadian Waters series, the Royal Canadian Mint commemorates this famously ill-fated voyage with a coin that depicts Franklin's ships before they were lost to the ice and cold waters of the Canadian North.

A prestigious addition to your Canadian, history or commemorative display! Order yours today!


EDGE LETTERING : Your coin includes edge lettering bearing the names "H.M.S. TERROR" and "H.M.S. EREBUS"
Your coin is the second in the Lost Ships in Canadian Waters series that commemorates well-known vessels lost in Canadian waters, and the stories that have emerged from the events surrounding their final fate.
This coin serves as a unique commemoration of the ill-fated Franklin expedition and its importance to the scientific exploration of Canada's Arctic region.
A stunning colour portrait of H.M.S.  Erebus  and H.M.S.  Terror  framed within the coastlines where the ships were abandoned in 1848.
Your coin is also a poignant reminder of the 2014 discovery of H.M.S.  Erebus  by a Parks Canada-led expedition, which was a truly historic moment for Canada; the find has added anew chapter to a story that has captivated so many,and may finally offer answers to the enduring questions that surround the expedition's demise.
Your coin is GST/HST exempt and has a limited worldwide mintage.

The reverse design features Canadian marine artist John Horton's depiction of the Franklin expedition's H.M.S.  Erebus  in the foreground, with H.M.S.  Terror  to starboard. Edging their way through ice-filled waters, the three-masted wooden vessels are seen travelling at a reduced speed under shortened canvas. The cool colour palette recreates the blue hues of the sky in daylight and the darker, icy waters of the Arctic. This stunning portrait situates the ships off of the northwest coast of King William Island, providing geographical context for their location when first deserted in 1848. Edge lettering bearing the names "H.M.S. TERROR" and "H.M.S. EREBUS" further commemorates the
two vessels and the 129 men who were lost.


H.M.S.  Erebus  and H.M.S.  Terror  were converted bomb vessels that had been outfitted for a previous voyage to Antarctica; there, the southernmost active volcano on Earth was named after the Erebus—as was a crater on Mars.
Lady Jane Franklin spent much of her fortune financing attempts to search for her husband and his crew, including the 1857-1859 voyage commanded by Captain Sir Francis Leopold McClintock that confirmed the tragic end of Franklin's expedition.
H.M.S.  Resolute  was part of an unsuccessful search for the Franklin expedition, and became one of four ships to be abandoned in the ice in 1853. Recovered by an American whaler, its timbers were re-used to create two famous desks, including the Resolute Desk, which has been used by several presidents of the United States.
Franklin's expedition may have been ill-fated, buthis intended route south of Victoria Island was used in 1906 by Roald Amundsen during his successful transit of the Northwest Passage.


Sir John Franklin and his crew set sail from Green hithe, England on May 19, 1845 with instructions to sail from the Atlantic Ocean to the Pacific Ocean via the Northwest Passage. Both H.M.S.  Erebus  and H.M.S.  Terror  were reinforced, equipped and well-stocked for this expedition, which initially looked promising. They were last seen by Europeans in Baffin Bay in the summer of 1845.

With no news from the 129 men and no confirmed sightings of the ships by 1848, the British government offered a substantial reward for information on the Franklin expedition's fate. This inaugurated one of the greatest search and rescue operations in history, marking an unprecedented period of exploration as vast areas of the Canadian Arctic were charted. The first clues to the expedition's whereabouts were finally found in 1850 when searchers located Franklin's 1845-46 overwintering site at Beechey Island, where they observed hundreds of empty food tins and
three graves. But as the search continued, Inuit testimony and the discovery of additional expedition-related materials revealed that the crew had all perished in the vicinity of King William Island; the recovery in 1859 of a record in a cairn on King William Island's west coast wouldoffer the only written confirmation of the expedition's demise.

This message reported that both ships had become icebound in 1846 in Victoria Strait and that
Sir John Franklin had died on June 11, 1847. By the time the ships were abandoned on April 22, 1848, 20 additional officers and men had also perished; the expedition's final word was that the 105 survivors intended to head for the Great Fish River (now known as the Back River)—but neither the men nor the ships would be seen again, at least by Europeans, until H.M.S.  Erebus  was identified in 2014 by Parks Canada.

The story of the Franklin expedition has continued to captivate, often blurring fact and fiction. Theories abound about the last days for many of the 129 men lost, including the roles played by lead poisoning, scurvy, starvation and cannibalism; but recent discoveries may in time shed new light on some of these theories. In the meantime, interest in H.M.S. Erebus  and H.M.S.  Terror  remains high, spurred by those who seek to solve one of the world's most famous maritime mysteries while revisiting a piece of Canada's national narrative.

Your coin is encapsulated and presented in a Royal Canadian Mint-branded maroon clamshell with a custom beauty box.

First in a new series. Collect them all!

As long as there have been people on Earth, there have been explorers—pioneering individuals with one eye trained on the horizon, eager to know what lies
beyond and always ready to break a new trail towards the future. But their adventure never ends, because every destination inspires another.

Exploration—that irrepressible spirit of discovery—fuels the life and passion of individuals. It drives the evolution of their community, and ultimatelyshapes the future of their nation.

A fabulous keepsake that will be cherished by history buffs, outdoor enthusiasts, and anyone with a passion for Canada's storied past. Order yours today!

Special features:
•   First coin in this exciting new series of 10 coins showcasing Canadian exploration and history.
•   Celebrate one of the most enduring icons of Canadian history with this 99.99% pure silver coin that captures the thrilling adventure of The Voyageurs life in exhilarating detail.

Design:
Your coin depicts an energizing design of five men shooting the rapids aboard a birch bark canoe that typified the fur trade. The Native oarsman at the helm represents the inter-cultural alliances that were criticalto the fur trade's success, and the diverse manner of dress among the men illustrates the extent to which The Voyageurs adopted Native ways of life. The treacherous waterway with its rocky outcrops ischaracteristic of the dangerous terrain The Voyageurs had to navigate; just one of many perils that were ever-present in the wilderness.

Packaging:
Your coin is encapsulated and presented in a Royal Canadian Mint-branded maroon clamshell box with custom beauty box.

Stock Photo Used, the coin will not be the pictured one.

The price is for one Silver coin in various conditions.

A new obverse with Queen Elizabeth II's portrait showing more mature facial features and wearing a tiara was introduced to all denominations in 1965. The caribou on a 25-cent piece dates back to 1936 when a change in the sovereign's image on circulation currency prompted the Canadian government to modify the designs on the reverse side of coins as well. The caribou design was created by Canadian artist Emanuel Hahn and was first used in 1937.

During 1968 coining it was necessary to discontinue the use of silver and substitute nickel for it. Nickel coins are darker in color and are attracted to a magnet.
Actual silver weight (ASW): 0.0937 troy ounces (troy oz)

The coin depicts the Tiara portrait design of Queen Elizabeth II with the Latin inscription:
ELIZABETH II D • G • REGINA  meaning  "Elizabeth II, by the grace of God, the Queen

Designed by Emanuel Hahn, the coin features a left-facing image of a Caribou head. The denomination sits between the antlers. The text to the left reads "CANADA", while the text to the right features the date.


Note: The photo of this item is a stock image only.

Price is for one coin at random or selected in store.