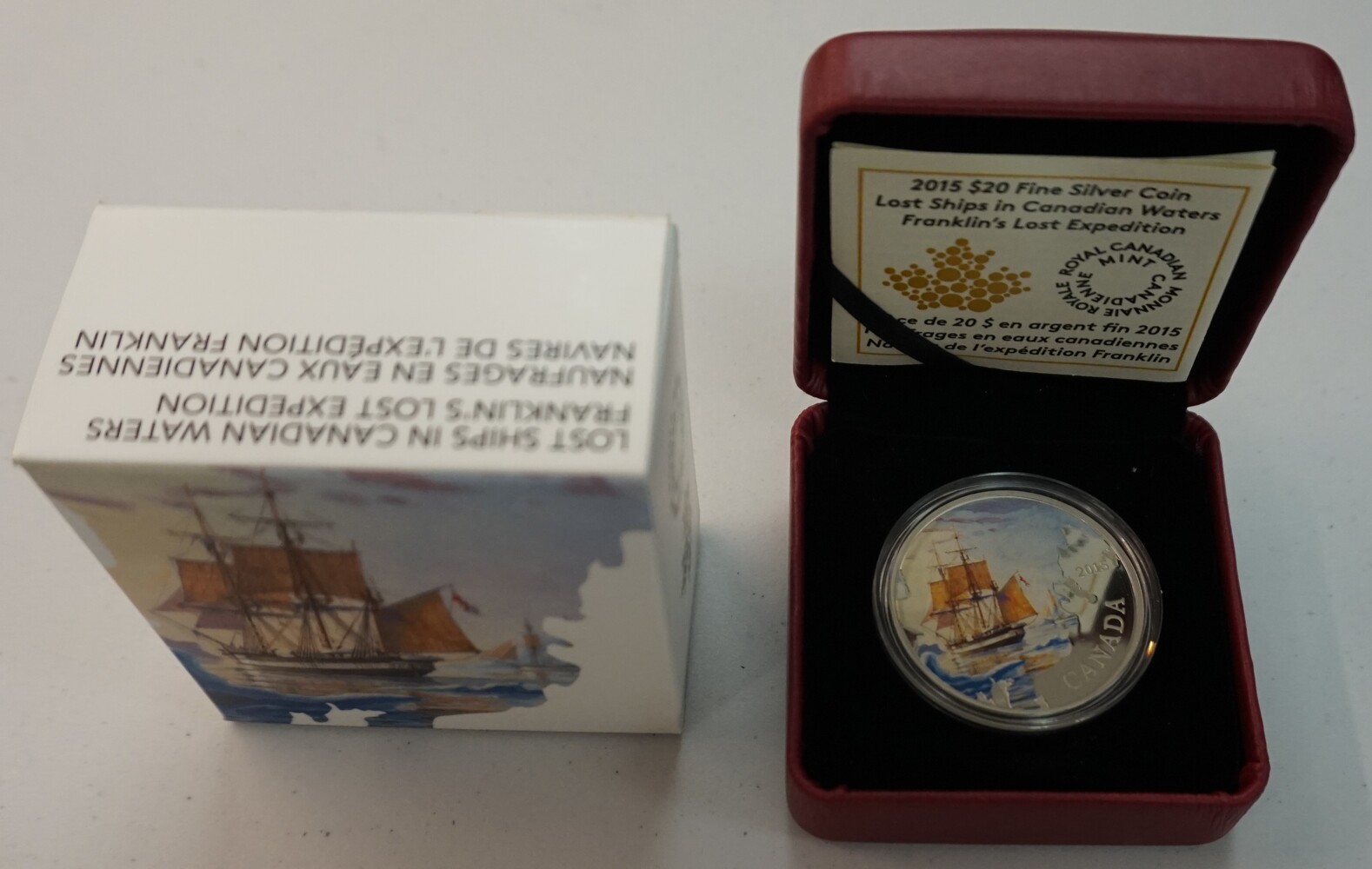 Not here! the white North has thy bones; and thou
Heroic sailor-soul,
Art passing on thine happier voyage now
Toward no earthly pole.
Alfred, Lord Tennyson (1809-1892), as engraved on a monument to Sir John Franklin in Westminster Abbey

It was the sensational story of its time, one that still captivates the imagination 170 years later. Under Sir John Franklin's command, two Royal Navy ships set sail with every expectation of success in
May of 1845 to chart the last unknown part of the Northwest Passage—yet they never returned. Subsequent expeditions who searched for the missing ships uncovered stories and relics; then, in September 2014 came news that stunned the world: Canada's Victoria Strait Expedition had discovered the wreck of H.M.S. Erebus, Franklin's flagship, lying on the Arctic seabed. This scientific breakthrough raises the possibility that new evidence could help solve some of the lingering mysteries surrounding the lost expedition and its final days, for what really happened to the Franklin expedition? In its Lost Ships in Canadian Waters series, the Royal Canadian Mint commemorates this famously ill-fated voyage with a coin that depicts Franklin's ships before they were lost to the ice and cold waters of the Canadian North.

A prestigious addition to your Canadian, history or commemorative display! Order yours today!

The reverse design features Canadian marine artist John Horton's depiction of the Franklin expedition's H.M.S. Erebus in the foreground, with H.M.S. Terror to starboard. Edging their way through ice-filled waters, the three-masted wooden vessels are seen travelling at a reduced speed under shortened canvas. The cool colour palette recreates the blue hues of the sky in daylight and the darker, icy waters of the Arctic. This stunning portrait situates the ships off of the northwest coast of King William Island, providing geographical context for their location when first deserted in 1848. Edge lettering bearing the names "H.M.S. TERROR" and "H.M.S. EREBUS" further commemorates the
two vessels and the 129 men who were lost.

Sir John Franklin and his crew set sail from Green hithe, England on May 19, 1845 with instructions to sail from the Atlantic Ocean to the Pacific Ocean via the Northwest Passage. Both H.M.S. Erebus and H.M.S. Terror were reinforced, equipped and well-stocked for this expedition, which initially looked promising. They were last seen by Europeans in Baffin Bay in the summer of 1845.

With no news from the 129 men and no confirmed sightings of the ships by 1848, the British government offered a substantial reward for information on the Franklin expedition's fate. This inaugurated one of the greatest search and rescue operations in history, marking an unprecedented period of exploration as vast areas of the Canadian Arctic were charted. The first clues to the expedition's whereabouts were finally found in 1850 when searchers located Franklin's 1845-46 overwintering site at Beechey Island, where they observed hundreds of empty food tins and
three graves. But as the search continued, Inuit testimony and the discovery of additional expedition-related materials revealed that the crew had all perished in the vicinity of King William Island; the recovery in 1859 of a record in a cairn on King William Island's west coast wouldoffer the only written confirmation of the expedition's demise.

This message reported that both ships had become icebound in 1846 in Victoria Strait and that
Sir John Franklin had died on June 11, 1847. By the time the ships were abandoned on April 22, 1848, 20 additional officers and men had also perished; the expedition's final word was that the 105 survivors intended to head for the Great Fish River (now known as the Back River)—but neither the men nor the ships would be seen again, at least by Europeans, until H.M.S. Erebus was identified in 2014 by Parks Canada.

The story of the Franklin expedition has continued to captivate, often blurring fact and fiction. Theories abound about the last days for many of the 129 men lost, including the roles played by lead poisoning, scurvy, starvation and cannibalism; but recent discoveries may in time shed new light on some of these theories. In the meantime, interest in H.M.S.Erebus and H.M.S. Terror remains high, spurred by those who seek to solve one of the world's most famous maritime mysteries while revisiting a piece of Canada's national narrative.

Your coin is encapsulated and presented in a Royal Canadian Mint-branded maroon clamshell with a custom beauty box.